February 18, 2021
If you are here, reading this, you are considering the purchase of a banjitar. This article will give you some information about some of the considerations you'll need before you take the plunge and hand over your plastic for one. 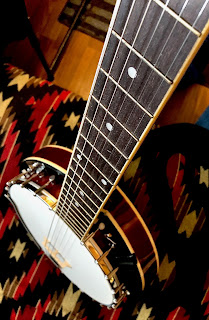 As you look around the Internet, you'll find various articles that tell you about the banjitar and, inevitably, you'll end up on a snooty banjo forum where some bluegrass purist will say something like "Why don't you just learn to play a real banjo." Don't mind him. He's a dumb-ass.

Chances are you are already a guitarist and you're looking for a different sound for a track on a song. Maybe you like the sound of the banjo and you don't want to take time to learn a whole new tuning. Maybe you want to play some styles of music like Dixieland Jazz that will be in keys that horns like to play in, like F, Bb, Eb, Ab, etc. In that case, a five-string banjo just isn't going to do it for you. The banjo was around a long time before Bluegrass became a thing in the 1940s. There are four-string tenor banjos with various length necks and tunings for Irish music and Jazz. There are mandolin-banjos that have eight strings. The six-string banjo is just another historical innovation in a long line of them. Don't worry about pleasing Bluegrass purists if you're just doubling on a studio date and you need a banjo sound and you don't have time to learn a new instrument.

When you look at the market for banjitars, you'll see models on eBay that sell for barely over $100 (US) and some that sell for almost $2500. What's the difference? Let me tell you the truth about this. If you buy a banjitar (or even a guitar for that matter) that is under $1000 in price,t it was built in Asia, probably in China, Indonesia, or Vietnam. If you go on the Alibaba web site and look up "banjo six strings" you will find several models. Except for the name on the headstock, they are almost all the same. The wholesale price for one of these runs between $78 and $130. Now go look at banjitars made by various companies and you'll find that the only visible difference in some of these is the shape of the headstock and the company logo on it. 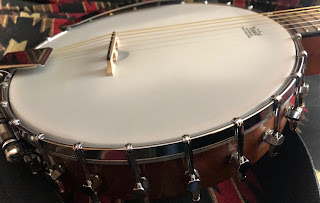 These are called OEM manufacturers and their factories crank out models under contract to big musical instrument manufacturers. If you look at the list of materials, they are all pretty much identical. Even with guitars (assuming you are familiar with them) pieces of wood, fretwire, and glue don't really cost all that much. What adds to the price is he amount of finishing work that goes into it.

If you buy a nice, imported instrument that sells for around $500 or so, it will have almost the same materials and quality of materials you'd find in a $150 instrument. The difference is the amount of time spent when the instrument is put together buffing out the finish, polishing the frets, setting the action, and tweaking the truss rod. Let's say a company pays an instrument tech $20 and hour to do the final work on a banjitar or guitar before it goes out the door. Let's say he spends three hours getting it just perfect. Their cost includes the guy's labor, not counting his benefits, workers comp, etc. That would add $60 to the manufacturing cost of the instrument. Then it gets sold to a wholesaler, who is going to put a 100 percent markup on it to the dealer, and then the dealer is going to add a 100 percent markup on it to the customer as the retail price. In the end, the $60 of labor adds at least $360 to the instrument's price.

When manufacturers send the instruments to music stores, they don't know if a specific batch of instruments will be sent to Miami, Florida or Minot, North Dakota. They set the action high so it won't buzz, because they know that's a turn-off to a potential buyer. Every stringed instrument needs to be set up for the climate it is in. The neck needs to be adjusted for the preferred string gauge of the player who owns it. The bridge height may need to be adjusted. The head will require tensioning to suit the preferences of the player. Even expensive instruments need to have this done so it's all the more needed for an inexpensive one where these steps don't get done at the factory.

If you buy a cheapie off of eBay for around $120, and if you know how to do some of this work yourself, you can be the final tech and adjust the instrument to your needs. If you can file down a bridge, cut nut saddles, set the truss rod, tighten the banjo head, etc., you can buy a very inexpensive instrument and get a good sound out of it. If you spend three hours doing these things, you just saved yourself $360, maybe more. There really isn't much of a difference in sound based on the materials, especially on a banjitar. Thus, you can make a $120 guitar play like one that is worth nearly $500. It is good to know how to do these things because, even if you buy an instrument in the $300 to $400 range, you may still have to do some of these things (or pay someone to do them for you) so the instrument will play right. 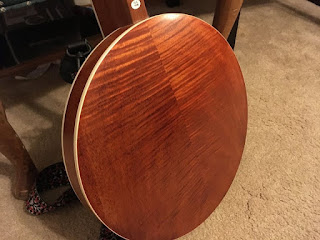 What kind of sound are you looking for? There are three distinct families of banjitars. The most common is the closed-back, which has a resonator on the back. There is an open-back design. These two varieties have distinctly different sounds. The ones with the resonator can get acoustically very loud. They can project like crazy. The open back ones are quieter and a bit mellower. They don't project as much. Your housemates might like a quieter banjo when you practice. Personally, I have both types and I don't have a preference. They are different sounds and I use them for different songs and moods. The open-back one is a lot lighter, but it's kind of neck-heavy. The closed back one is heavier, but it is better balanced.

The rim or pot of the banjo is the round structure with the brackets that holds on the head. These materials will vary, but generally they are made of laminated woods. The weight and density of the wood makes a difference in the tone. The flange is the part that holds the head on and is held down with the brackets. The flange material also affects tone in various ways. I can't say which one is better or worse because the sounds appeal to people differently. Some banjitars, like the Dean Backwoods, have an aluminum rim. In this variety, the flange and the rim are cast as one piece of aluminum. These can be very heavy and durable. It's a different sound, but not better or worse.

In more expensive banjos, there are tone rings that are made out of different types of wood or metal, like steel or brass. These also affect the sound, making it warmer or darker, with greater or less articulation. Banjos don't need these structurally, but it is a different kind of sound, more attuned to the traditional Bluegrass tone. The ones without tone rings don't sound bad. They are mellower and still sound great. The upper end Gold Tone and Deering banjos have tone rings.

The neck design on a banjitar is a big consideration, even more so than when buying a guitar. The neck and bridge placement determine the scale length, or playable length of the strings. Most guitar necks are either 24.75 inches (Gibson Les Paul length) or 25.5 inches (Fender Stratocaster length). The longer length makes the string less flexible, harder to bend, and it accentuates different harmonics. It sounds snappier, crisper than the shorter length. Banjitars can come in these two lengths, but it's not common. Most of them use banjo scale length, which is 26.5 inches. This makes a big difference in the feel. If you play first position chords on a banjitar with a 26.5 scale length, it will definitely feel different to you, maybe even a little uncomfortable. 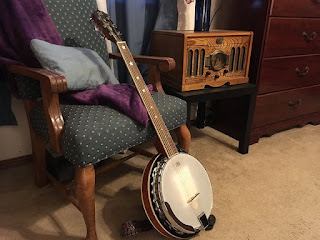 Some banjitars come with a radiused fingerboard (curved) like a guitar and others are flat (like a banjo). I have one that is radiused and one is flat. It only takes a few seconds to adapt from one to another once you are used to it. The flat radius is easier to finger-pick because the strings are all lined up in the same plane. The rounded ones feel more guitar-like. The thickness of the neck also varies from one brand to the other. Some have a C- or D-shaped profile. Some have an extended neck heel for more stability. This is all a matter of preference and comfort. One model, the Deering Solana's neck is designed for nylon-string playing and feels like a classical guitar's neck.

Speaking of strings, you'll get a really wide variety of sounds with different kinds of strings. Generally, lighter gauges sound better. The banjo doesn't really lack for volume and you don't need mediums to drive a wooden soundboard. Most banjitars come from the factory strung up with light gauge acoustic strings. Most people don't like the sound of them and the 0.011 gauge is a little heavy. One my open-back banjo, I use plain old Ernie Ball Earthwood strings, extra-light gauge (0.010 to 0.046). The closed back banjo uses Ernie Ball Slinky electric guitar strings (0.009 to 0.042). Some players like to get as close to the 5-string banjo sound as possible and they replace the lower sounding strings with unwound strings an octave or two higher than normal. (See video here.)

I hope you find this information useful. The banjitar is a very personal instrument and everybody who plays one sounds different, as you can see from the videos on the site. Shop around and, if you are decent at doing a little bit of setup work, you can make a fairiy inexpensive instrument to the trick for you. Good luck in your search!