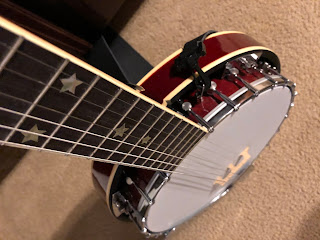 Just because the banjitar is tuned like a guitar, it doesn't mean you can play it like a guitar. YouTube is full of people demonstrating their new banjitars and they sound like crap. It's a wonder anyone would every buy one after seeing one of those videos. The player will often strum away like he's banging on his big acoustic dreadnought, pounding on the deep bass notes. Almost always, the instrument hasn't been set up and often, it's not even tuned properly.

Banjitars need to have the head adjusted properly to optimize tone, especially when a change of string gauge is involved. It's good to have some internal dampening of some kind in the banjo. If you watch five-string banjo players, they keep a couple of picking hand fingers rooted to the top of the head to dampen unwanted resonances. If you don't do this, then you should consider putting a little piece of foam or a cloth between the head and the coordinator rod, somewhere near the bridge, to dampen the resonances.

Even though the banjtar is tuned like a guitar, it's a different instrument entirely. The head amplifies the sound far more than a guitar's wooden top. This means that finger squeaks and palm muting are louder and much more noticeable. There is less sustain and pretty resonance. In most cases, you want to tamp down extraneous resonances. Playing with vibrato can create some unpleasant overtones.

Playing banjitar requires a lighter touch. You have to de-emphasize the volume of the lower strings to keep things balanced. The playing position is also different. Guitarists tend to play seated in one of two positions. Classical guitarists prop their left leg up on a stool and hold the guitar on their left leg. This balances the guitar better and frees up both hands. Most steel-string guitarists hold the guitar on their right leg. (Of course, the left-handed minority reverses this.) With the steel string guitar, the neck is held almost perpendicular to the body, while the classical guitarist angles the neck upward about 45 degrees. In each case, the soundhole of the guitar is almost centered over the player's heart. The round body of the banjitar requires the player to hold the instrument on the center of his lap. The longer neck needs to be angled upward, usually more than 45 degrees. This places the head of the instrument almost level with or higher than the player's eyes.

These changes require adjustment of the player's hand positions, both left and right. This, in turn, changes the player's posture. On guitar, fingerpicking with a classical hand position, using a high, arched wrist gives you lots of power. On banjitar, a tucked, almost cramped picking-hand position works better. On guitar, fingerpicking with thumb and three fingers is pretty standard. On banjitar, thumb and two fingers seems to work better.

If you're strumming chords, you want to stay away from the low-sounding strings. They tend to overpower the sound. Try to keep your picking concentrated on the four high strings, especially if you're trying to emulate the tenor banjo in a Dixieland-style context. However, if there's no bass player in your combo, you can try walking the basses like Johnny St. Cyr did with Louis Armstrong's band sometimes. In that case, you would want to minimize chording in favor of the bass line.

If you are accompanying a guitarist or group, you want to avoid playing the same chord voicings as the guitar player. If the guitarist is playing a standard, vanilla, G chord in first position, try using a higher inversion and playing only a few of the notes. If the guitar player is strumming, you could be fingerpicking. If he is fingerpicking, use a different, but complimentary picking pattern. If you are a fairly advanced player, try using polyrhythms, like playing six against four.

These are just a few of the adjustments guitarists need to make when switching over to the banjitar. It has it's own demands and players who accommodate the instrument find it's a rewarding effort. What kinds of adjustments have you needed to make? Leave a comment below and share your experiences with your fellow readers.