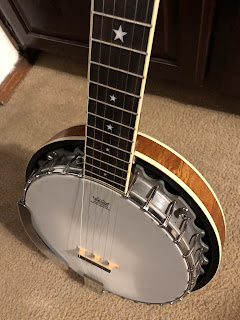 Have you ever run into one of those hardcore Baptists who can only see the world their way? There's nothing you can say or do to get them to recognize that someone else could, at least theoretically, have reason to believe differently. They just can't see it. Never mind that the Catholics were there about a thousand years before them. There just can't be any other way than theirs.

That is what I would compare most five-string banjo players when it comes to the banjitar. Never mind that there were banjos around, some with four strings and some with six strings long before Bluegrass music became a thing in the 1940s. You can't get them to even consider answering a question if it might lead someone into banjitar "apostasy."

I recently joined a banjo forum on the MeWe social network. I asked a question about fingerpick gauges that work best, just to solicit some advice. Now, fingerpicks are not new to me, but I have used them on guitar for forty-odd years. In that instance, I'm playing on bronze-wound strings of a much heavier gauge than would any banjo player. I made the mistake of mentioning that I was using a banjitar. At that point, I might have been asking a Baptist about praying the Rosary.

Only one person gave me an opinion on his favorite pick gauge. The rest were like these responses:

"You will probably not get a good sound on a six-string banjo. It's an intrinsically flawed design."

"A lot of so-called music bands play 6-stringers. Sounds like crap to me in my humble opinion."

"The real problem is that a banjo 6 does not resonate on the two low strings like a guitar does. So it will never have the strong points of either instrument."

See what I mean. It  Just like "Praying to Mary won't get you into heaven, brother."

As a fledging banjitarist, I just don't get it. They don't see our instrument as a "real banjo." They don't see playing other styles of banjo as even being "real music." They see people who play banjos with four or six strings as not being real musicians who play in "so called music bands." That mindset astonishes me and, as I have researched information about banjitars, I find that it is ubiquitous.

In the end, that's why I created this site. There needs to be a home in this world for musicians who play banjos who aren't narrow-minded morons. If that includes you, welcome home brothers and sisters!