Why a 6-String Banjo? 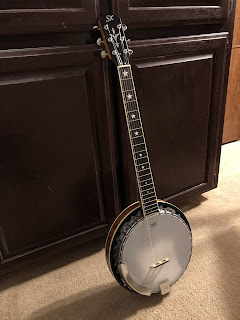 Why would anyone want to play a 6-string banjo or banjitar? What does it offer that a 5-string banjo can't? What are some of the advantages the instrument has? Let's address some of those questions today.

The first reason a person might pick up the banjitar is the fact that it is tuned like a guitar, with six strings. Lots of people strum the guitar, which is tuned E-A-D-G-B-E from low to high. This means that the chords you learned on the guitar will work on the banjitar. The fingerpicking patterns you know can convert over easily. Although the banjitar requires some adjustment of technique, you don't have to totally learn a new instrument. If you are just an occasional player or if you are a pro who just wants a change of tone color during your set, the banjitar is a good option.

On stringed instruments, it's easier to play in some keys than in others. For example, it's a lot easier to play in the key of E-minor than it is to play in F-minor because the availability of open strings. This means that you don't always have to fret every string and that the ringing, open strings adds depth to the sound and makes it easier to play without having to use barre chords up the neck. If you want to play in a key like A-flat for example on a traditional 5-string banjo, you'd have to completely re-tune the instrument to get something usable (unless you are Bela Fleck, perhaps). The 5-string banjo is tuned G-D-G-B-D, which is an open G chord. Banjoists have to frequently retune their instrument for different songs. This complicates learning and it's inconvenient, especially in a live show.

The 5-string banjo has an oddity that stems from its ancient roots in Africa. It has a high drone string on the "top." That string is shorter than all the rest, thus there has to be a tuning peg stuck in the top of the neck halfway down. As far as any historical stringed instrument goes, that's a weird setup. It means that, in general, on most stringed instruments, the lower strings are on the top where they can be played by the thumb of the plucking hand and the higher strings are on the lower side where the plucking hand fingers can reach them. A 5-string banjo has it's highest string on the top. It's generally a high G string. If the string was stretched the full length of a banjo neck, usually over 26 inches, it would break constantly because of the tension. They shorten the string so it can be tuned up high without breaking. That puts the tuning peg around the fifth fret. It's a weird thing and it's very counter-intuitive, which makes transitioning to banjo from any other stringed instrument a challenge.

That fifth string is used mainly as a drone, which means that it's not normally fretted. It just rings as an open string, which is what gives the 5-string banjo its unique sound. If you are playing a D-chord for example, that high open G note is not a part of the chord tones. It's the suspended fourth against the D-chord and it makes a cool sound. However, that open G gets in the way. If you were trying to play in the key of E-major, for example, you'd either have to retune the string to G-sharp or else you have a flatted 6th, a dissonant tone, ringing away in the chord.

This is the reason 4-string tenor banjos are used in Dixieland Jazz. That genre plays music that is largely horn-based. Horns love to play in flat keys, like F, B-flat, E-flat, and A-flat. The drone string on a banjo would sound bad in those keys. Back in the day, banjoists playing in Jazz bands just took off the drone string, leading eventually to it being omitted all together. Tenor banjos then evolved to use an all-fifths tuning, more like a the violin family of instruments. This allowed it to play in most all keys equally well, compared to the usual open-G tuning of the 5-string banjo. The increased chordal vocabulary complemented the style and the instrument became part of the rhythm section as a strummed instrument, not plucked. The plectrum style developed as a result of it. It was the limitations of the 5-string that drove the development of the 4-string tenor banjo. As Jazz evolved into the Swing Era, the guitar took the place of the tenor banjo. That's when the 6-string banjo first emerged, because it allowed banjo players to adapt to guitar tuning and guitarists to get a banjo tone.

In modern popular music, the 6-string banjo has made a resurgence. Artists like Taylor Swift, Keith Urban, and Joe Satriani have taken it to new audiences. Multi-instrumentalist genius Harvey Reid has explored its capabilities and used it in live performances. His album "The Artistry of the Six-String Banjo" takes the listener through Blues, Classical, Jazz, Ragtime, Celtic, and other genres. There is a lot of creativity coming from players of the banjitar today.

In the end, the 6-string banjo offers possibilities you can't get on a 5-string or 4-string banjo. Like any stringed instrument, it requires some setup and adjustment when you get a brand new one. If you are a guitarist, you will have to adjust your technique a little bit, but not drastically, in order to get the best sound out of a banjitar. If you are a pro guitarist who wants to double on banjo for a song or two in a Jazz or Klezmer band, the banjitar works great and you don't have to learn to play and read music in a different tuning. If you want to play in "horn keys" it's easy to transpose or to capo up to the proper key without having to re-tune the instrument. There are a lot of advantages you might consider. Most of all, never listed to the closed-minded purists who say, "Never buy a 6-string banjo!" They really don't know what they are talking about.